A multi-purpose building in 1920s Palisade, Nevada was the jail, schoolhouse, courthouse and morgue 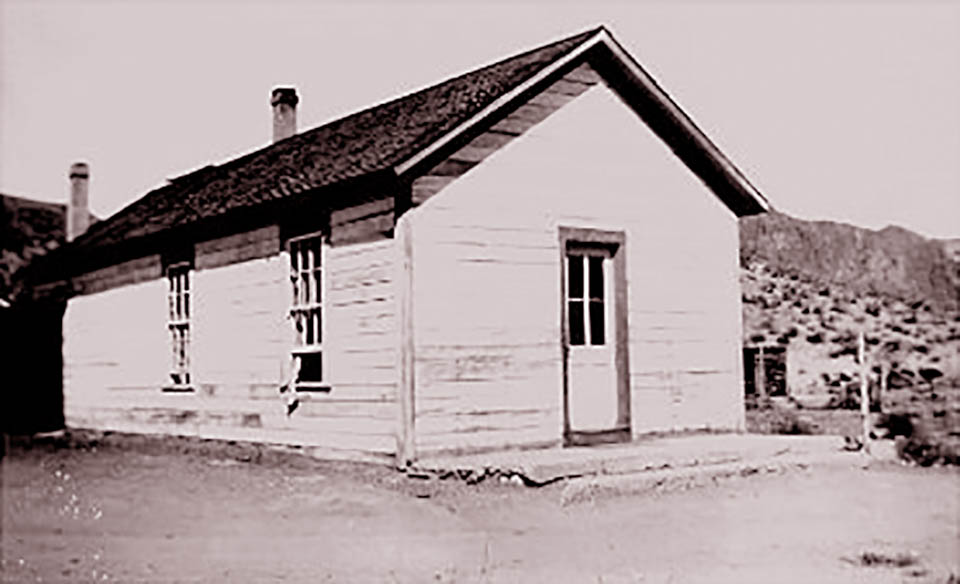 This undated photo shows the gone-but-not-forgotten building used as a schoolhouse, jail, morgue and courthouse in Palisade, Nevada, during the 1920s. From Terry Hickson collection

Gone-but-not-forgotten is this building in Palisade, Nevada, that served the community as a jail and a schoolhouse in the 1920s (and sometimes was also a morgue and courthouse).

Palisade, Nevada, is one of many ghost towns in the Silver State. Like other communities in the region, the town’s history is associated with mining and the railroad. It was a station on the Central Pacific Railroad (later Southern Pacific).

By 1931, when the famous newspaper column “Ripley’s Believe It or Not” shared the story of a schoolhouse in Palisade that also served as the town jail, the tiny town was headed into its last days.

And although there is next to nothing left of Palisade today, there are great stories.

There was an important connection between the two towns, though, because the Eureka & Palisade Railroad was completed around 1875, linking the rich silver mines of Eureka with the intercontinental railway connection in Palisade.

By 1938, though, the mining heyday was over and the rails and rolling stock — which were the last narrow-gauge railroad in Nevada — were removed.

By then Palisade had suffered a decline and a devastating flood. The community may have had as many as 600 residents but was down to fewer than 150 people when the post office closed in 1961.

According to an article by Terry Hickson, an Elko, Nevada, school teacher and journalist who died in 2014, the jail in Palisade during the 1920s was in a building that also served as the community’s schoolhouse and, when needed, as a morgue. The building was also used as a courthouse by traveling judges.

Hickson said the school-jail was publicized in “Ripley’s Believe it or Not” newspaper column on July 10, 1931.

An Elko resident who remembered attending the school had shared her memories with Hickson.

In the 2005 article, Hickson wrote that the late Angela Zunino Avery recalled that two small cells were in the back of the room of a building where seventh and eighth graders went to school. Once, she said, a body was found in the river and since the town didn’t have a morgue, officials stowed the body at the school-jail.

Although the teacher sprayed cologne around the room, the body had a “pretty potent smell,” Avery said, noting students were “awfully jumpy knowing there was a body back there.”

It seems claims that Palisade got a reputation as the roughest, toughest town west of Chicago in the 1870s because train passengers reported witnessing stagecoach robberies, shoot-outs and Indian attacks there.

Apparently a train conductor had mentioned to a town resident that passengers were disappointed that the Wild West wasn’t as wild as they had expected, from reading all of the exciting stories published in dime novels of the day.

So the townsfolk got the idea to give train passengers some entertainment by staging excitement while the train was in the station.

Sometimes there was a bank robbery with a wild shoot-out with the lone Eureka County Sheriff — and other times they would claim that Indians were on the warpath.

Local Indians even got in on the act, riding into town in feathers and war paint on, then pointing their guns at the train to scare the passengers.

In fact, Hickson wrote, there was so little going on in Palisade that the people — and the sheriff — had nothing to do but stage their little dramas.

In 2005, the Elko Daily Free Press reported that the ghost town of Palisade was on the market — not that there was much left of it.

At the time, the property was owned by two brothers and one told a reporter that he remembered a jail and adobe buildings on the townsite when he was a child, some 50 years prior.

He said the state condemned the jail and took it, as well as the schoolhouse, and dismantled it. At one time the town had hotels, stores, saloons, churches and more.

In April 2005 a San Francisco newspaper reported the town had sold to an anonymous buyer at auction for $150,000.

Palisade has just about faded away forever — but fortunately, the Hicksons helped preserve some of the old town’s history.