Bored during the pandemic? You can “rent” a cell at Wyoming Frontier Prison

Tina Hill, Historic Site Director at the Wyoming Frontier Prison in Rawlins, Wyoming, shows off one of the cells available for “rent” during a fundraiser organized in response to the coronavirus closure. The museum is hoping to make up for revenue from tours, which account for 72 percent of its budget. The virtual “rentals” are via Facebook interaction. Photo courtesy of Wyoming Frontier Prison

If you’re looking for an interesting diversion while you wait out the coronavirus pandemic, you might consider “renting” a cell at the Wyoming Frontier Prison.

You can’t actually occupy the cell, but you can have some fun with it on Facebook and help the former state penitentiary (now a museum) keep up with expenses during the COVID-19 closure.

Construction of Wyoming’s first state penitentiary began in 1888, although the facility now known as the Wyoming Frontier Prison did not open until December 1901. Funding problems and harsh weather delayed completion until about 18 months after the former Wyoming Territory became the 44th state of the United States of America.

The prison housed more than 13,000 inmates — both men and women — during it’s 80 years of operation. It was closed in 1981 when the new Wyoming State Penitentiary opened (located a few miles south).

After a horror film (“Prison”) was filmed at the former prison in 1987, folks got the idea to create a museum and in 1988 a joint powers board assumed ownership, renamed it the Wyoming Frontier Prison, and opened a museum that typically attracts more than 15,000 visitors annually. The property is listed on the National Registry of Historic Places.

Shelter-at-home orders and closure of public facilities due to COVID-19 had an immediate impact on the Wyoming Frontier Prison, known locally as the “Old Pen.”

According to Historic Site Director Tina Hill, the prison museum depends upon tour revenue to meet expenses. When closure was ordered, she knew she had to do something fast to keep the operation afloat.

Hill said she got together with the museum’s two part-time staffers and together they launched an idea for “renting” cells at the rate of $10 per week.

Of course, you don’t actually get to occupy the cell. After all, there’s a global pandemic underway, travel is not recommended, and the prison is officially closed.

Still, supporters of the museum and others have ponied up the “rent” via Facebook. In exchange, they have had fun seeing their names (or pseudonyms) on placards posted on their assigned cells and displayed on the Wyoming Frontier Prison’s Facebook page.

To “rent” a cell, visit the Wyoming Frontier Prison’s Facebook page and reserve a date. Pay your “rent” by buying a ticket and watch the Facebook page over the next few days to see a photo of your cell with your name (or pseudonym) on it. 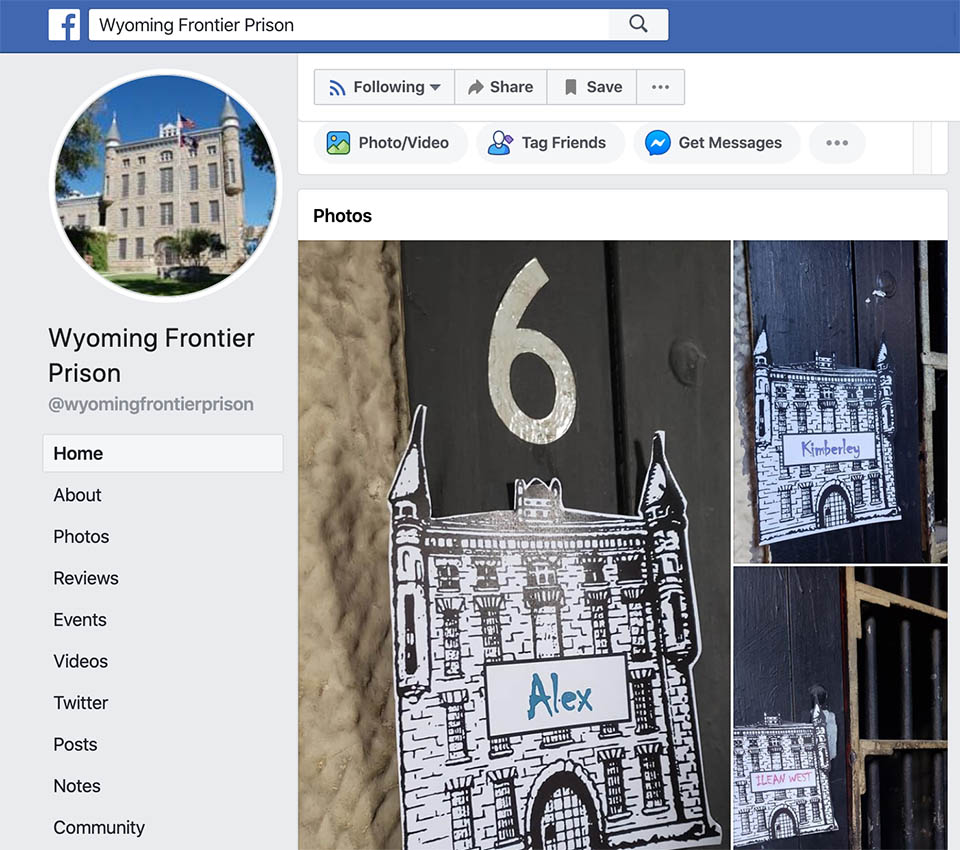 An example of how the Wyoming Frontier Prison is using Facebook for virtual cell “rentals” to raise money to offset tour revenue during the coronavirus pandemic. Facebook image

You might even be lucky enough to have your cell featured in one of the video tours Hill does to keep Facebook visitors interested in the promotion. And you’ll want to share the photo of your “cell” to let your friends know what you’re up to during the pandemic.

The museum director said she’s very appreciative of the interest people have shown in the cell “rentals” and their willingness to donate.

“If our historic prison has a ghost of a chance to survive this crisis, we will need help,” Hill said.