These iron gates once controlled entry to a prison established in Kenya by the British to help control the Mau Mau uprising. Now the formerly abandoned building serves the community as a fire station. Photo by Ndung’u Gachane, courtesy of Daily Nation

A former prison built in 1952 by the British in Kenya in response to the Mau Mau uprising has found new life as a fire station for Murang’a Town, located 50-some miles northeast of Nairobi, capital of the African nation. The town is the capital of Murang’a County, home to about a million people.

The 67-year-old colonial building that now houses the fire station was one of the first constructed in the town known as Fort Hall when the country was under British rule from 1888 to 1962.

Inside the compound, several firefighting engines are parked in an open field in front of an old gate leading to the former prison. 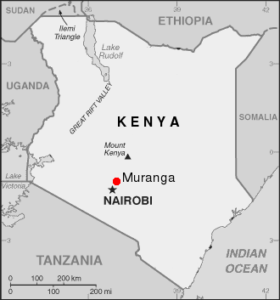 Location of Murang’a in Kenya. Image: Wikipedia, based on a CIA map, public domain.

The cells have been partitioned to create rooms for training firefighters on search and rescue techniques, computer classes, recreational rooms for the fire station staff, and an equipment store.

John Kihiu Mwangi, the Mau Mau Organising Secretary in Murang’a, recalls how those found guilty by the court (in nearby Kandara) would be jailed at the prison.

When the prison became overcrowded, he said, it was the only one in Murang’a District (Murang’a County) and yet it had been built because of overcrowding at another prison (King’ong’o Prison in Nyeri County, about 90 miles to the north.

“Most of the inmates were Mau Mau freedom fighters not considered dangerous,” he said. “Those believed to have been involved in administering oaths were taken to detention camps such as Manyani and Hola.”

The prison’s yard area is now the training ground for firefighters.

Some cells have been converted into control rooms, the county fire officer’s office, a kitchen and hostels for the men and women who respond to disaster in Murang’a County.

After independence in 1964, the new Kenya government abandoned the building and built a new prison a short distance away. The defunct municipality used the old prison as a workshop for some time before abandoning it.

Before renovation, Murang’a Chief Fire Officer Bilha Wanjiku said the old prison had become a habitat for wild animals, and that locals visiting nearby offices used to relieve themselves in the area to avoid the charges at public toilets.

After enactment of Kenya’s 2010 Constitution and movement of services like disaster management to the community level, Wanjiku said she was tasked with finding an appropriate place for setting up a fire station.

As most of the local authority’s offices had been taken up by the county government, she settled on the old prison.

“It was not easy,” she said. “Soil that filled about 20 lorries (trucks) was removed. The huge bush was cleared and the snakes driven out using pesticides. We partitioned the cells into offices, training rooms and hostels for our firefighters.”

She said she is glad the old prison has been preserved by being put to good use, and she hopes the National Museums of Kenya will partner with the fire department to establish a monument with a brief history of the facility, since few people are aware of its rich historical background.

NDUNG’U GACHANE is a journalist in Kenya. An earlier version of this article was published in Daily Nation.