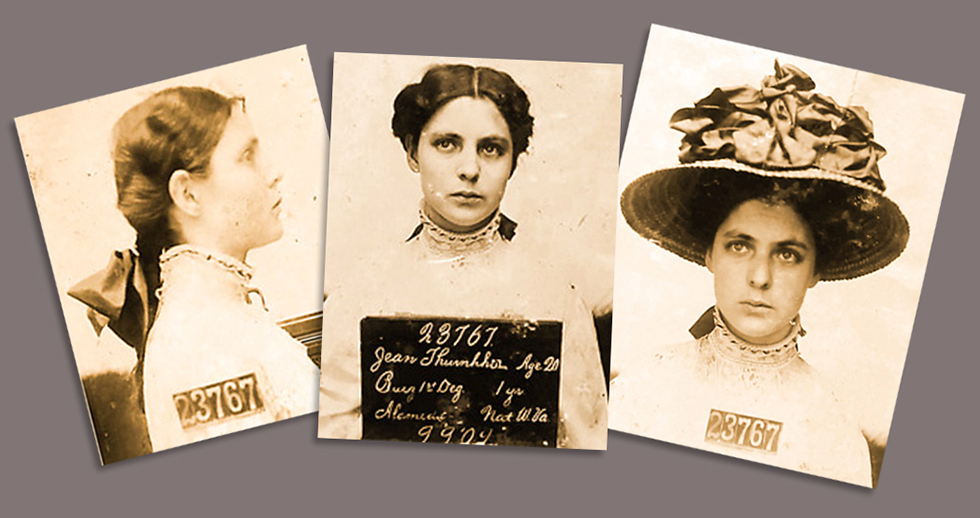 Jean Thurnherr, aka Bessie Barclay, when she was incarcerated at San Quentin Prison. Photo courtesy of California Department of Correcions and Rehabilitation

At the time there were no prisons in California so the first state inmate, a 22-year-old cabinet maker named Charles Currier, (said to be a horse thief) was put aboard the La Grange, an old ship used as the Sacramento County jail from 1850 until 1861.

There were plenty of abandoned ships in the harbor at San Francisco since the arrival of prospectors from all over the world after the 1849 gold discovery, and Currier and other convicts were moved to one of them – the Waban – in December 1851. The old bark was towed to Angel Island in San Francisco Bay and the 40 inmates aboard began construction of the first cell block at San Quentin, returning to be locked up aboard the Waban again each night.

Don Chaddock, writing for the California Department of Corrections and Rehabilitation, tells the story of Currier and other early inmates in an Unlocking History article.

Other Unlocking History articles relate San Quentin connections with many names familiar to students of California and the Old West, including bandit Black Bart, mail carrier Snowshoe Thompson, and stagecoach driver Charley Parkhurst. More than 45 articles are available in the Unlocking History archives.

Although California didn’t add “Rehabilitation” to the official name of its corrections agency until 2004, the state prison system has a long history of rehabilitative efforts, as shown in the historical feature CDCR Time Capsules, published on the agency’s official website.

An example is an 1874 report by an investigative committee.

Although the committee was critical of the physical structure of San Quentin – then barely 20 years old, but already in need of repair – it was complimentary of the education and work program and what it described as “kind but firm treatment.”

And an article about an 1877 report from Lt. Governor James A. Johnson (who also served as prison director) told of a fire that destroyed important structures – and revealed California’s approach to prison management at the time.

“The solitary system … never reclaimed any man, and never will,” Johnson wrote in the report, no doubt referencing the much-celebrated system then in place at Pennsylvania’s Eastern State Penitentiary, “it is cruel, and more barbarous than capital punishment.

“The silent system is worse and more cruel,” he continued in what was likely a reference to the competing Auburn System in New York state at the time. Instead, Johnson promoted what he called “the congregate system, where men work together and when not at work talk freely together.”

These are but a few of the instances of the tremendous amount of detail available in official reports published through the ages that are referenced in the CDCR Time Capsule archives, providing insight into prison management in the state over more than 160 years.