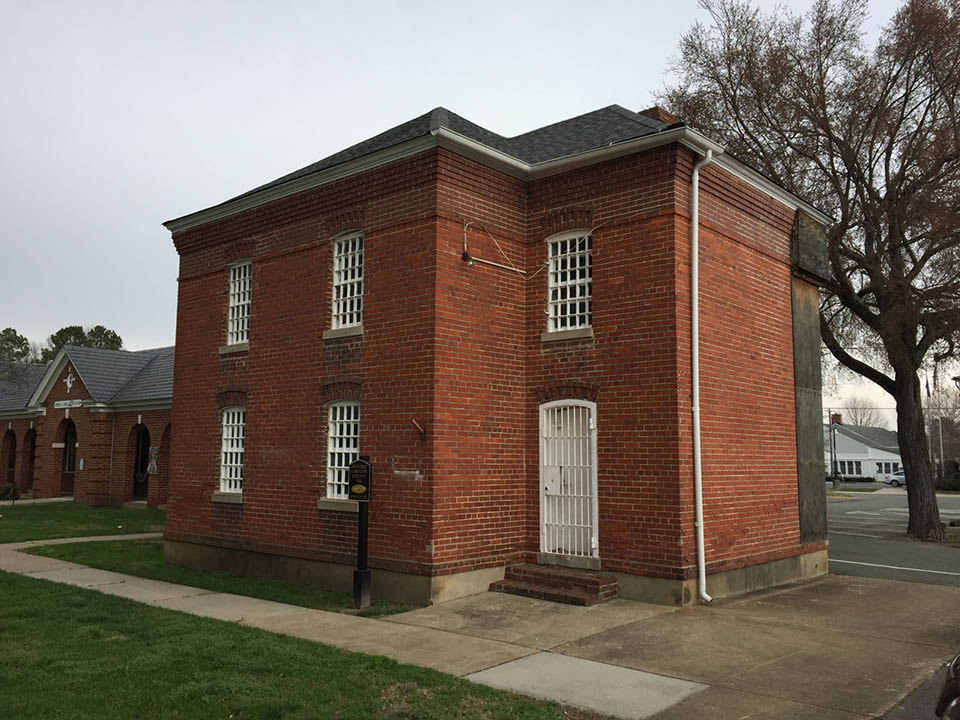 An old jail associated with the 1967 landmark U.S. Supreme Court decision, Loving v. Virginia — and where legendary basketball player Wilt Chamberlain was once detained for a night — has been recognized as a state historic landmark.

Members of the Caroline County Historical Society are happy that the county’s old jail has been recognized as a historic landmark by the Commonwealth of Virginia. According to an article written for the Free Lance-Star in Fredericksburg, Virginia, the recognition follows an 18-year effort.

An application to have the old Caroline County Jail listed on the National Register of Historic Places (NHRP) was completed in December 2019. The application describes the structure as follows:

“The Old Jail of Caroline County is a two-story brick building with a hipped roof, located at the southern edge of the courthouse square in the town of Bowling Green, Virginia. Virtually unchanged since it was constructed in 1900, the Old Jail is a plain but elegant Colonial Revival building which harmonizes with the Greek Revival Caroline County Courthouse (ca. 1835) standing to the northwest, in the middle of the courthouse square.”

The jail served Caroline County from 1900 to 1968, when the Caroline County Historical Society began using the building as a museum and office. Currently, the jail is unoccupied, as the historical society moved its museum to another building in 2002. 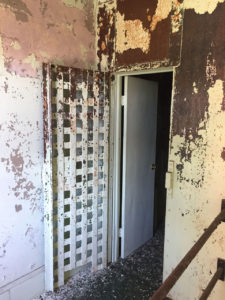 The old Caroline County Jail in Bowling Green, Virginia, is one of few remaining jails in the state built by the Pauly Jail Company. Photo from National Register of Historic Places application

According to a 2002 article by journalist and historian Stan Beason (who died in 2003), the jail was built to replace an 1803 wooden jail which was lost to the first of two Easter Sunday fires in the community (see editor’s note below).

“The lone inmate at the time of the fire was praised for his valiant efforts to save the structure,” Beason wrote. “That’s understandable, especially if he had been locked in as the flames approached.”

After the loss of the 1803 jail in 1900, according to Beason, the county supervisors contracted with agents of the Pauly Jail & Manufacturing Company of St. Louis to provide what was described as a “tool-proof cage.”

Such security did not come cheap, as the contract was for $4,200 — at a time when the county’s liquid assets only amounted to about $1,700.

Still active today, the Pauly Jail Building Company was established in 1856. The company’s founder and his family were steamboat blacksmiths on the Mississippi River and began to create steel cages that could be mounted on flatbed wagons. These portable jails helped communities provide secure lock-ups. Soon the company was supplying parts for jails all over the country.

According to Beason, the old Caroline County Jail was one of as many as eight Pauly jails in Virginia — and possibly the last one standing. The 1900 jail, he said, also survived the devastating fire of 1955 — also on Easter Sunday.

Further research for the NRHP application, though, shows that between 1884 and 1939, the company erected or supplied cells for 49 jails and prisons in Virginia. But by 2019, only 18 of the buildings associated with the 49 still existed — including the old jail of Caroline County — and that jail is now one of only six in the state “that exhibit sufficient historic integrity to be considered good intact examples of Pauly jail design and construction.”

At a celebratory event held January 26, 2020, retired Sheriff Otto “O.J.” Moore, who is 90, recalled his arrest of Chamberlain in 1956 — before the man who many regard as the greatest basketball player of all time was recognized as the NCAA Tournament’s Most Outstanding Player in 1957.
Moore said Chamberlain was driving about 100 mph when he was stopped him. He had no idea who the 7-foot-1 man was at the time.

“I told my wife that night that I arrested a teenager, that when he got out of the car his head kept going, going, going in the air,” Moore said at the event.

According to the application for the jail to be listed on the NHRP, the basketball player’s arrest was in 1955 and “reportedly, Chamberlain left an inscription on the wall which reads, “This jail is a helluva place.”

This landmark case had its beginning in Caroline County where Richard Loving, a white man, and Mildred Jeter, a woman with Cherokee, Portuguese and African-American ancestry, grew up in the tiny town of Central Point and fell in love. They had one child together and then when Mildred was 18 and Richard 24, found that she was pregnant again.

The couple then traveled to Washington, D.C., to marry. According to author Phyl Newbeck, Richard knew it was not legal for the couple to be married in Virginia, but Mildred thought they went to Washington because there was less “red tape” there.

A few weeks later, acting on an anonymous tip, local police raided their home and arrested them for violating Virginia law, claiming that their marriage certificate was not valid.  Following their arrest, they were confined to the Caroline County Jail.

In her book, “Virginia Hasn’t Always Been for Lovers: Interracial Marriage Bans and the Case of Richard and Mildred Loving,” Newbeck noted that Mildred recalled her cell at the old Caroline County Jail was rat-infested

“Although a local historian disputes this recollection, Mildred is not the only one to report an abundance of rodents,” Newbeck wrote. “Basketball star Wilt Chamberlain was once detained overnight in Bowling Green. His autobiography makes reference to the four-legged creatures with whom he shared the hours.”

In January 1959, the Lovings pled guilty to “cohabiting as man and wife, against the peace and dignity of the Commonwealth and were sentenced to a year in prison. Their sentences were suspended on the condition that they leave Virginia and not return together for at least 25 years. They moved to the District of Columbia and in 1964 began a legal fight that ended with the June 12, 1967, Supreme Court decision.

The NHRP application provides a substantial account of the time the couple spent in jail:

“As recorded on their arrest warrants, bond was set for Richard and Mildred at $1,000 each. With the help of a bonding company, Richard’s sister was able to get Richard released from the Old Jail in less than twenty-four hours. When Richard tried to get Mildred released, he was told that she would not be let out and that he would be put back in jail if he continued to ask for her release.

“Mildred, who at the time was six-months pregnant with the couple’s second child, would spend a total of four days in jail before being released under the supervision of her father. While in the Old Jail, Mildred was confined to the cramped five-by-seven-foot female cell on the second floor. A former Caroline County Sheriff’s deputy described the Old Jail in a 2011 documentary film on the Loving case: ‘Our jail was hell. It had 16 bunks in it, but it wasn’t no hotel. When she [Mildred] was arrested, she was put in the small cell, the woman’s cell. They had a sink and a commode, and you give them a little something to eat through the door. We could only take one woman.’

“Mildred’s experience of the Old Jail was miserable and frightening. Years later in an interview, she told of a particularly terrifying incident: ‘One afternoon, this inmate had been out on the outside working, and when the sheriff brought him back in, he said, ‘I should let you go in there with her tonight,’ which scared me to death.’

According to the NRHP application, the interior of the old jail “retains its original configuration of spaces, consisting of a stair passage with evidence locker and a large cell room for male prisoners on the ground floor, and three spaces on the second story—the stair passage, a large room that functioned as a holding cell, and a smaller room used for female prisoners.”

However, the original steel-bar cells were removed from the ground-floor cell room in 1968 when the historical society converted the jail to a museum.

“Despite the loss of the cells, the building retains nearly all other of its original fittings and finishes including windows, reinforced concrete floors and ceilings, and steel interior walls, doors, and door and window bars,” the application states. “The Old Jail is a remarkably well-preserved example of the scores of small county and city jail buildings that were erected throughout the Commonwealth around the turn of the twentieth century, the vast majority of which are now demolished or have been severely altered in the course of conversion.”

Caroline County traces its history to 1728 when it was formed from portions of King and Queen, Essex, and King William counties. Initially, according to the NHRP application, court convened in the homes of the court justices until a courthouse was built near present-day Shumansville sometime before 1732. The first jail buildings in Caroline County were insubstantial structures, and by the 1750s the court was using at least four jails in various locations in the county. Some were said to have been nothing more than rented cellars or converted outbuildings.

After 1736, when there was an election riot, efforts were made to provide more security for the jail building at the courthouse. However, the improved jail would serve only six years before it was destroyed by fire, and the county was forced to hold prisoners in the cellar of a nearby tavern until a new jail could be built.

Sometime after 1764, the county built a separate jail facility exclusively for debtors, also at the site of the first Caroline County courthouse in Shumansville. A more central location in a building near the current main entrance of Fort A.P. Hill was used for some court sessions by the 1770s, and in the 1780s the old courthouse was abandoned entirely. In 1794, a prominent planter and horse breeder named John Waller Hoomes paid 700 pounds for the right to move the seat of county government about three miles southwest to his plantation, which was called Bowling Green.

By 1805, Hoomes had built the county a new two-story wood-frame courthouse on his land near where the Richmond-to-Fredericksburg road intersected with the road to Port Royal. He also provided the county with four acres of public land at the site, and a portion of this four acres was laid out as “the bounds for debtors,” the first jail facility in the new county seat of Bowling Green.

The present brick courthouse was constructed around 1832 and was some distance from the Hoomes building. The history of jails in Caroline County between 1832 and 1848 is sketchy, due to the lack of surviving documents. and it is possible that a new jail was also built at the same time. A report from 1848 does not contain an architectural description of the jail, but does pronounce the building to be “in good repair, sufficiently aired and ventilated in summer & capable of being kept warm and comfortable during winter, with good stoves & properly secured with bolts and locks.”

Whether this is the same building that was described in an 1866 report as being “very insecure, having been rendered so by prisoners and federal soldiers within the last four years” is not clear, according to the NHRP application. However, it states, the jail described in 1866, 1867, and 1868 reports was “a two-story brick structure with two rooms and a stair passage on each level. The four rooms were each approximately twelve feet square and eight feet high and featured interior surfaces ‘lined with sheet and bar iron.’”

Editor’s note: There is a conflict between the 2002 contention by journalist and historian Beason that the historic 1900 two-story brick jail that is the subject of this article was built to replace an 1803 wooden jail which was lost in the 1900 Easter Sunday fire and the reports that the “jail described in 1866, 1867 and 1868 reports” was a two-story brick structure, which the author cannot resolve with available information.