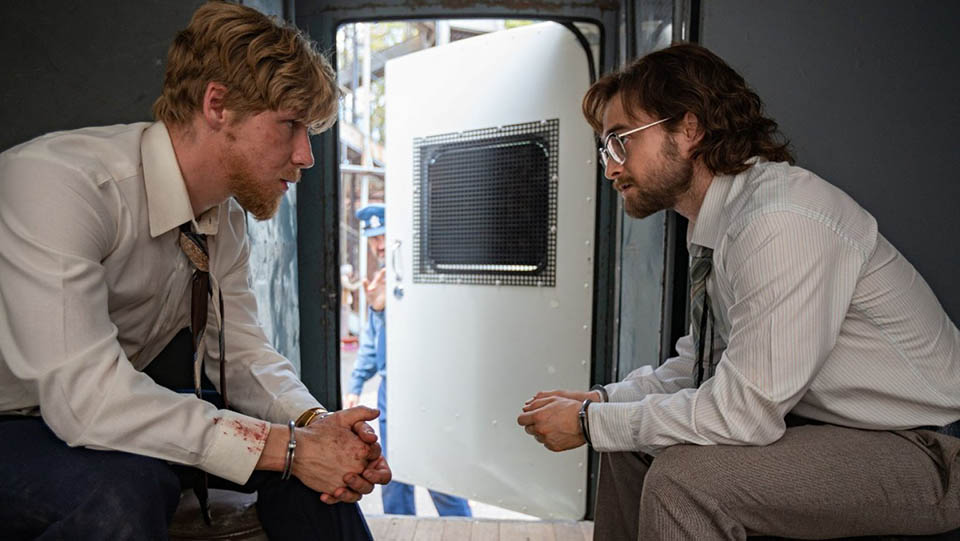 Actors Daniel Webber as Stephen Lee and Daniel Radcliffe as Tim Jenkin (left to right), were in Australia in March 2019 to film “Escape from Pretoria,” a thriller that will premiere March 6 (in theaters and streaming). Ian Routledge/Arclight Films

The streets of Adelaide, South Australia, were transformed to appear to be 1970s-era South Africa in March 2019 for the filming of “Escape from Pretoria,” a thriller based upon the 1979 escape by three young political prisoners from a South African prison. The film will premiere March 6, 2020, (in theaters and streaming)

ABC Radio Adelaide reported that the streets of the Australian city were transformed into apartheid-era Cape Town during filming, with props including a bus covered with 1970s era labeling, as well as vintage vehicles and signage including “whites only taxi.”

“Escape from Pretoria” is a thriller film based on the real-life escape from a South African prison by three young political prisoners in 1979. The film stars Daniel Radcliffe as Tim Jenkin and Daniel Webber as Stephen Bernard Lee. The film, based on Jenkin’s book, “Inside Out: Escape from Pretoria Prison,” was written and directed by Francis Annan.

Although whites were a minority in South Africa in 1948, the all-white National Party came into power in 1948 and began enforcing racial segregation under a policy called apartheid.

Under this policy, the law required limited contact between whites and nonwhites, and the rights of nonwhites increasingly diminished. Apartheid lasted until the early 1990s, but not without criticism.

The story of Nelson Mandela, South Africa’s first black head of state and the first president elected in a fully representative democratic election, has been widely told. Mandela spent 27 years as a political prisoner and was held at Pretoria Central Prison while awaiting trial on two occasions (although most of his incarceration was at the prison on Robben Island).

But apartheid wasn’t only opposed by nonwhites. Resistance within South Africa took many forms. Two white South Africans — Jenkin and Lee — were among those who objected to apartheid. The pair were arrested on March 2, 1978, charged with helping to produce and distribute pamphlets for the African National Conference and other organizations that had been banned by the government. Following their trial, Lee was sentenced to eight years in prison and Jenkin to 12, and eventually, they were moved to the maximum-security area of the prison, which reportedly was reserved for white male political prisoners.

Two museums in South Africa provide insight into the events depicted in the film — the Apartheid Museum and the Correctional Services Museum at Kgosi Mampuru Prison (formerly Pretoria Central Prison) and a third tells more of the story.

The Apartheid Museum, located in Johannesburg, South Africa, opened in 2001. A variety of permanent exhibitions tell the story of the dark days of apartheid, including the execution of 131 government opponents, mainly at Pretoria Central prison.

The Correctional Services Museum at Kgosi Mampuru Prison (formerly Pretoria Central Prison) is located in Pretoria, the administrative capital of South Africa. The prison gallows is now a museum with the names of prisoners who lost their lives their inscribed on the walls and a display of ropes fashioned into nooses and suspended over a wooden trap door. During the museum tour, visitors retrace the 52 steps prisoners climbed to reach the hanging platform.

Nelson Mandela, who became South Africa’s first democratically elected president and won the Nobel Peace Prize, spent 27 years in prison. He was at Pretoria Central Prison twice while awaiting trial (although most of his incarceration was at the prison (now a museum) on Robben Island).

Find out more about “Escape from Pretoria” at IMDb.com.